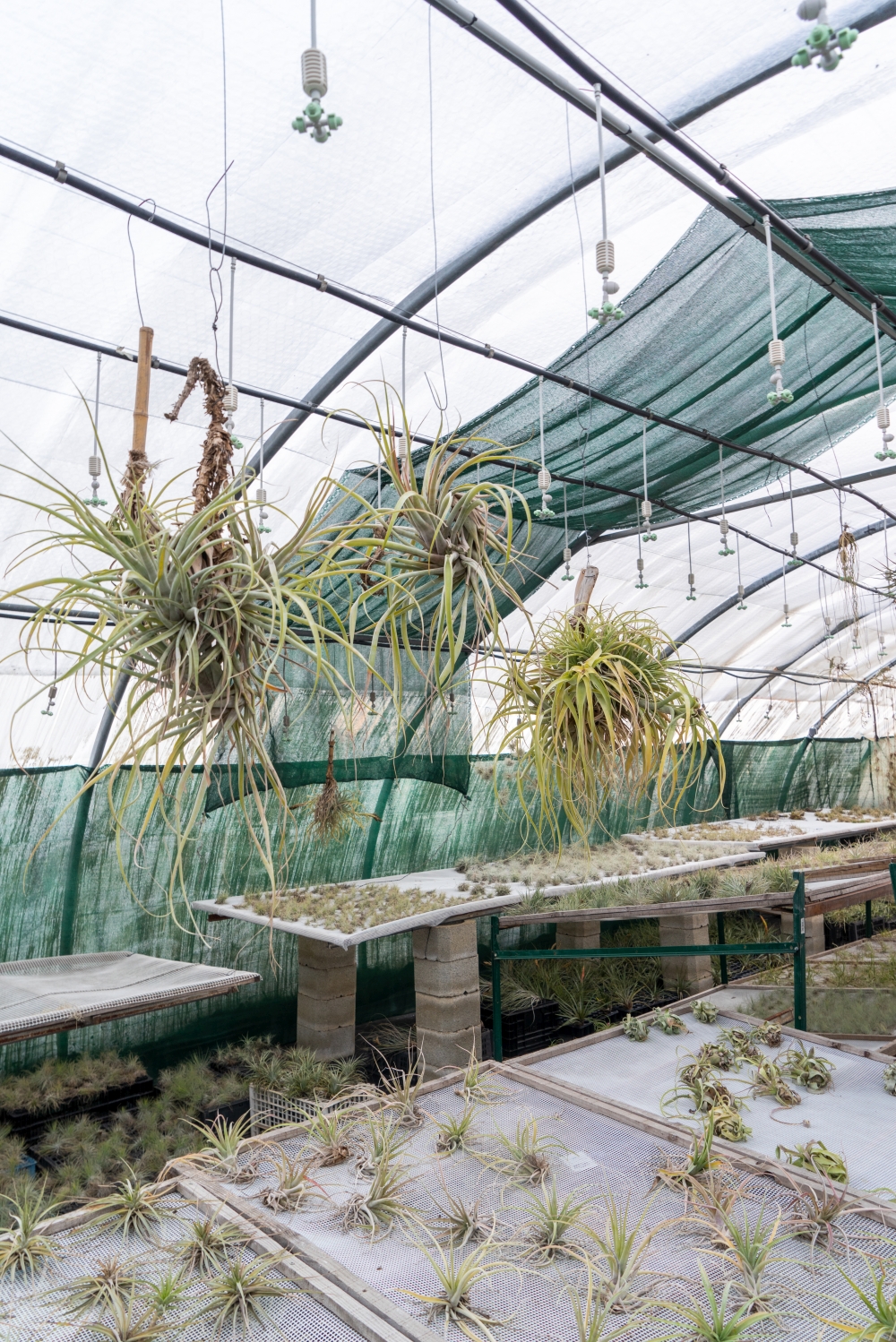 My quest for houseplant nurseries in our neighborhood continues today! When moving to the Ardèche I did a bit of research on what kind of nurseries and greenhouses are located here (there are plenty!) and I also met quite a few horticulturists at one of the larger Plant Fairs here, this spring. Both the Cactus nursery and the Tillandsia nursery were on my must-visit list and last week I finally managed to go there. It was just after a so-called “épisode cévenol”, which means there’s a lot of rainfall and streams and waterfall develop quickly in the hours and days after. So on our way to the “Liloo“, we made a few stop-overs to watch some waterfalls that are usually non-existent. And thus: we arrived just before nightfall at Laurie’s greenhouses. I quickly snapped some photos, which you can see in this post, and then we talked (like true plant nerds) until closing hour. 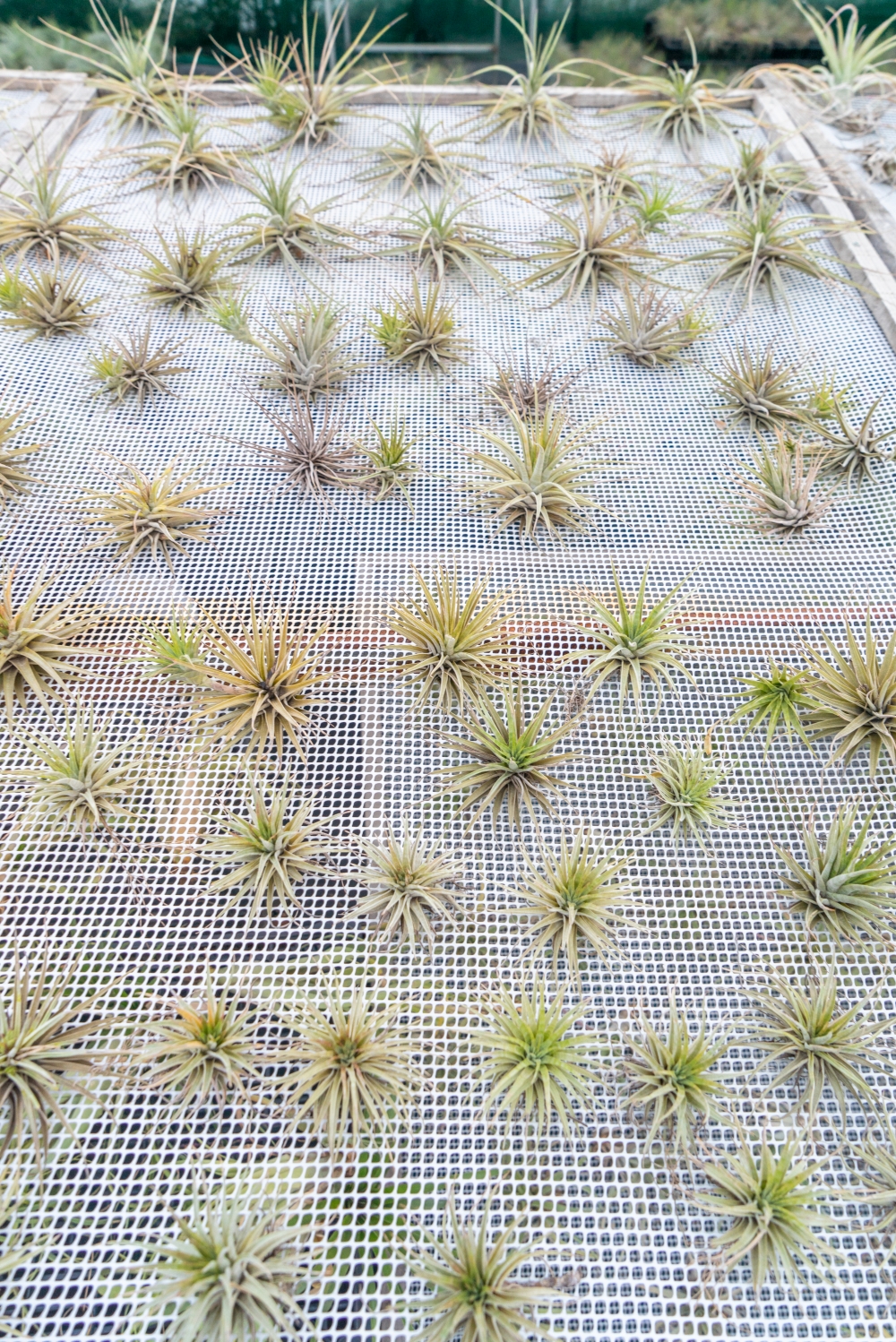 Laurie, owner of Liloo Producteur de Tillandsias, is very passionate about her work. She started growing her first Tillandsia airplants over 15 years ago, in the area of Les Vans, also in Ardèche. Just over a year ago, she moved to Lagorce, overlooking the hills near Vallon Pont d’Arc. The air and humidity conditions are completely different from her previous place, which means that she had to adjust the care of her more than 200.000 airplants in the greenhouse this year. 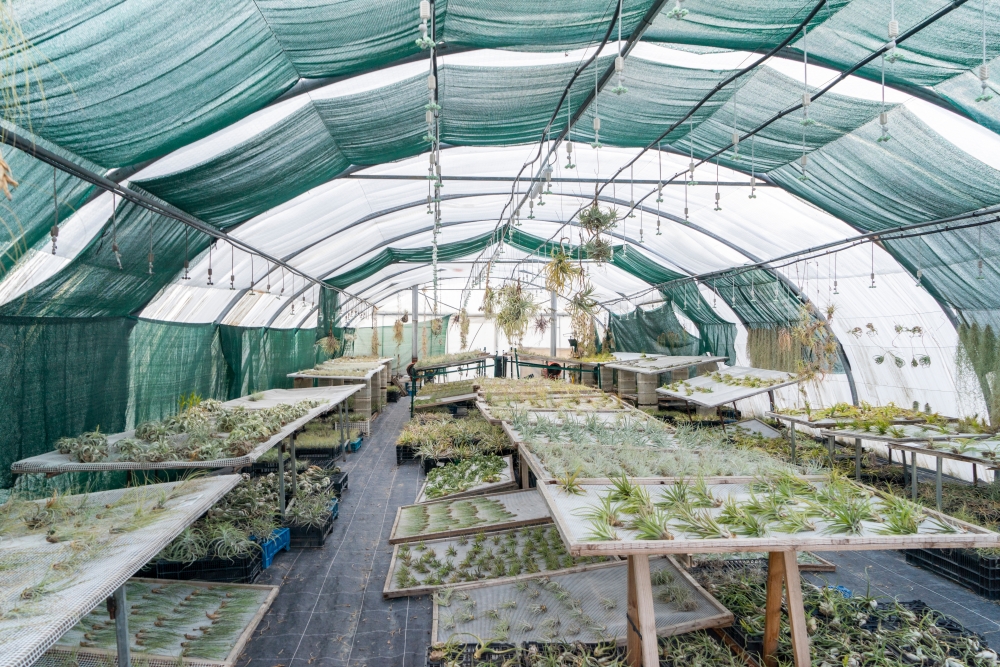 Airplants are so poetic: they come from the family of epiphytes and this means, instead of growing from the soil, they attach themselves to other plants without being parasitic or causing harm. You can find them on tree trunks in tropical rainforests where the tree’s canopy shades them from the sun, giving them filtered sunlight exposure. In your home they love some daily bright indirect light. They survive without typical soil with nutrients, because Tillandsia have trichomes (tiny scales) on their leaves for nutrients and water absorption. That’s why you can be creative with decorating with Tillandsia and anchor or mount to any kind of surface that you like for displaying, without needing plant pots with watering holes and so on. Filles de l’air, as Tillandsia are often called in French, like dancing little girls: especially when they are displayed hanging from the ceiling, like in Laurie’s greenhouse: 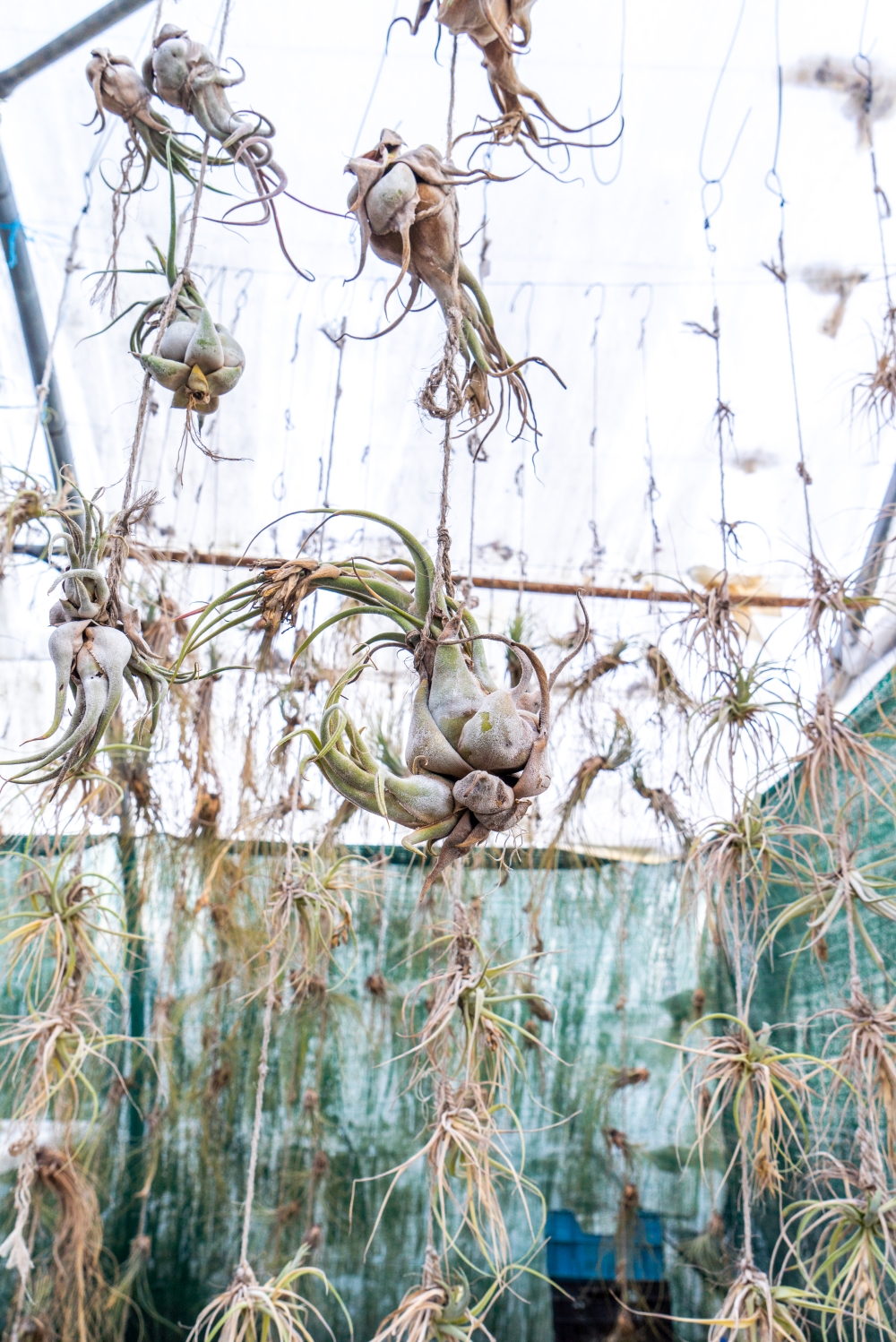 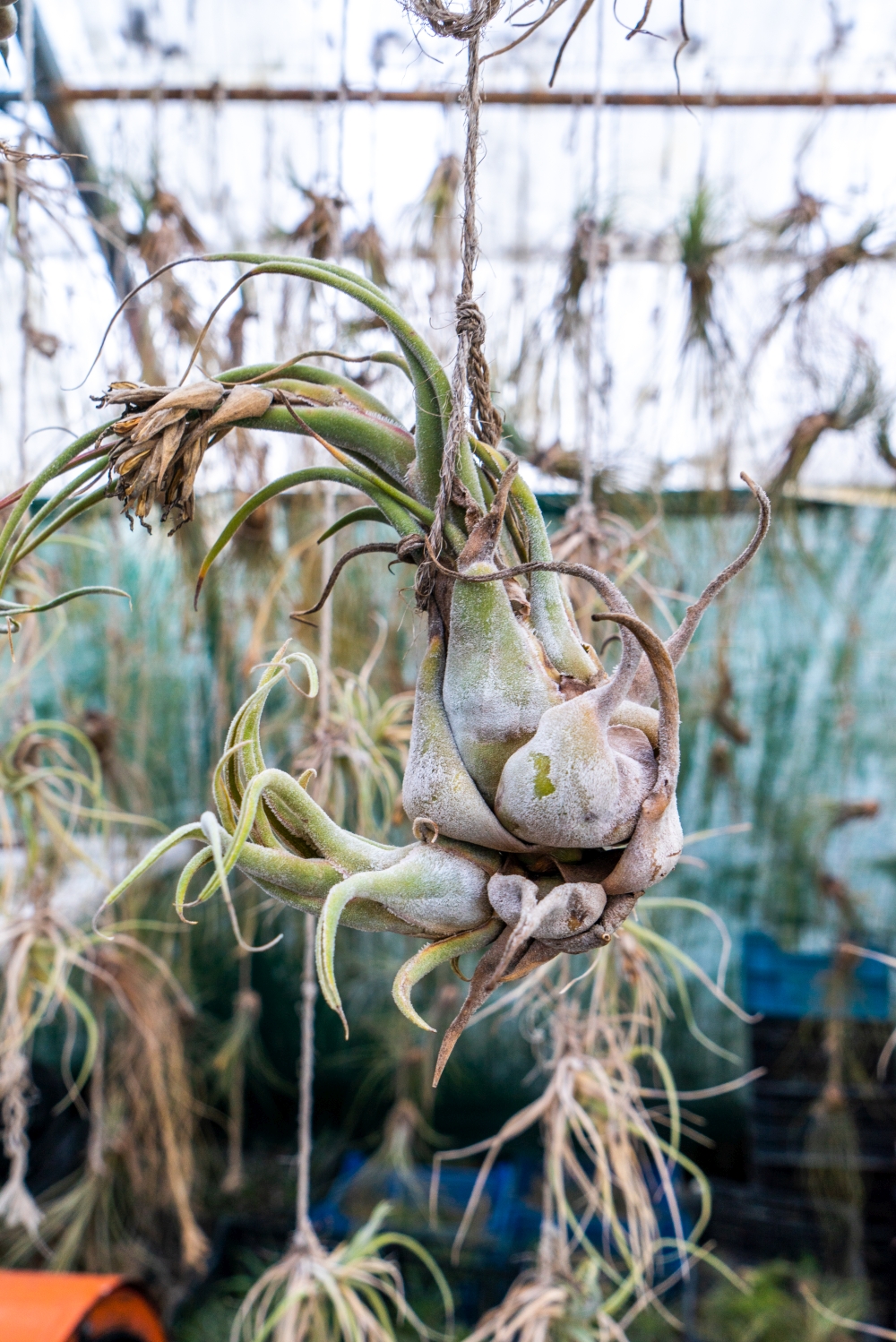 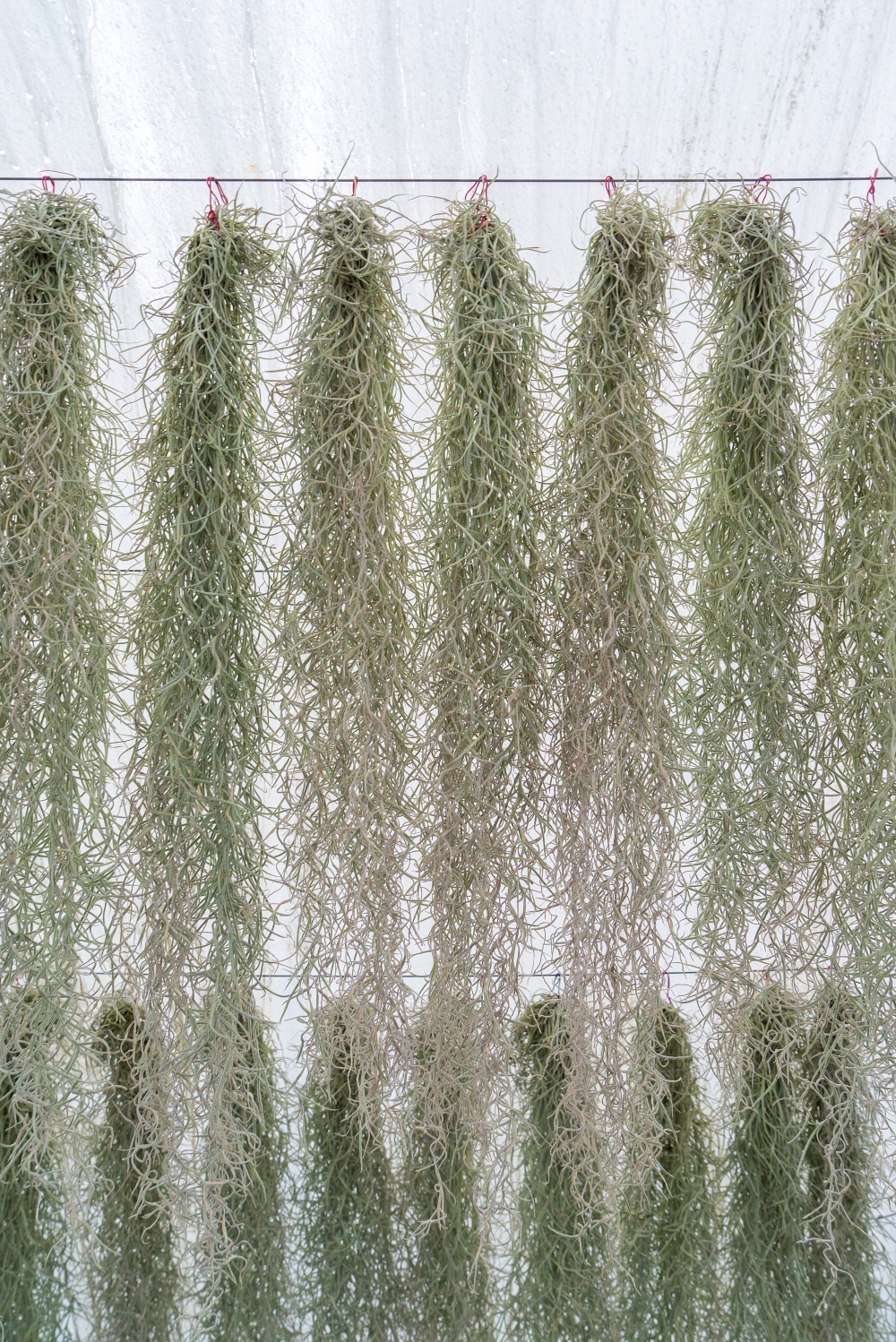 Laurie’s greenhouses are open to the public on Wednesdays: you can visit, look around, shop for Tillandsia and airplant decor, ask all your questions about these poetic plants. You can also find Liloo at several plant markets: keep an eye out on her Facebook page where she announces the upcoming events. 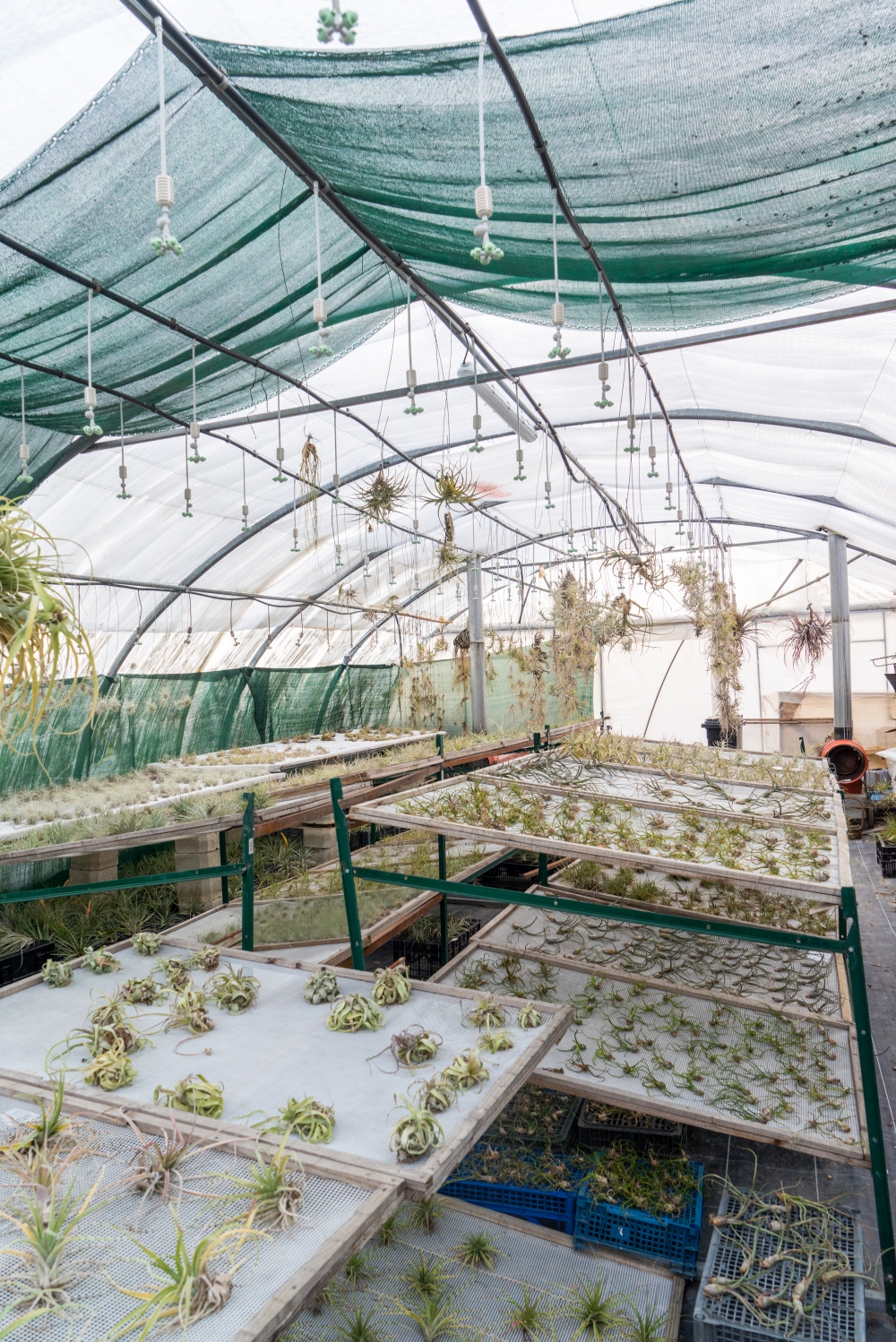 Not long now until these beauties will start blooming: 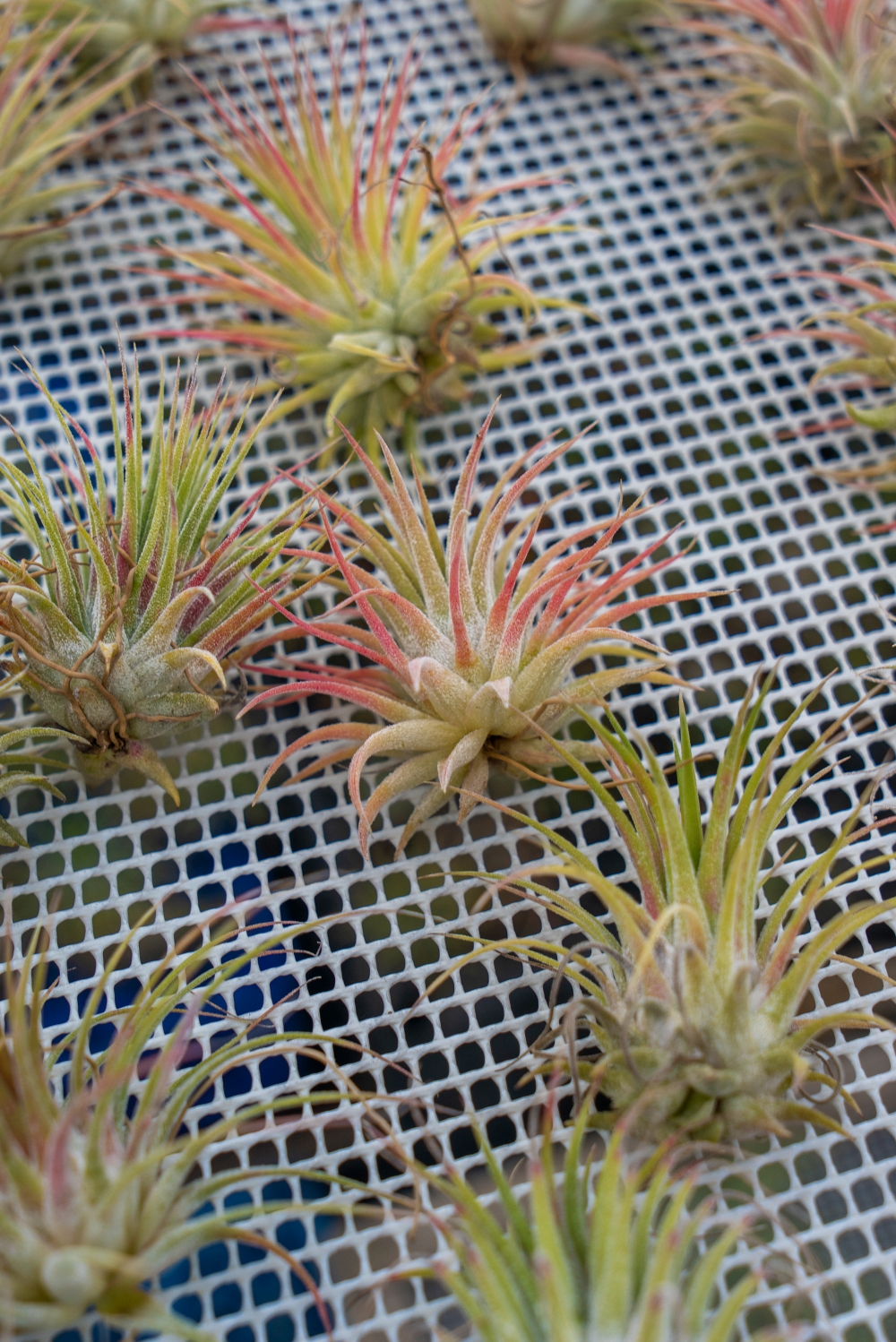 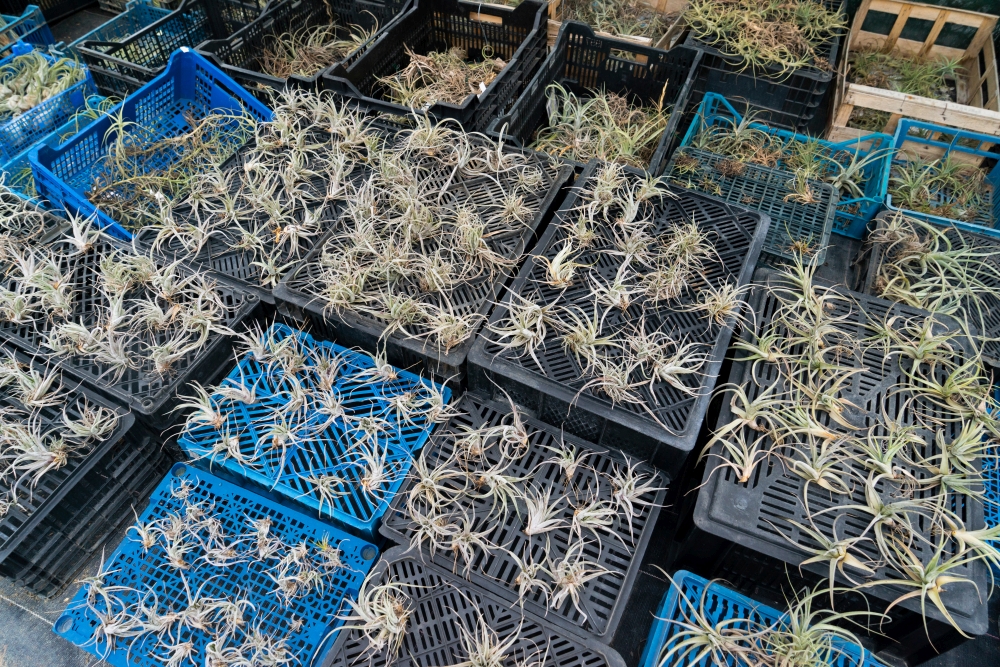 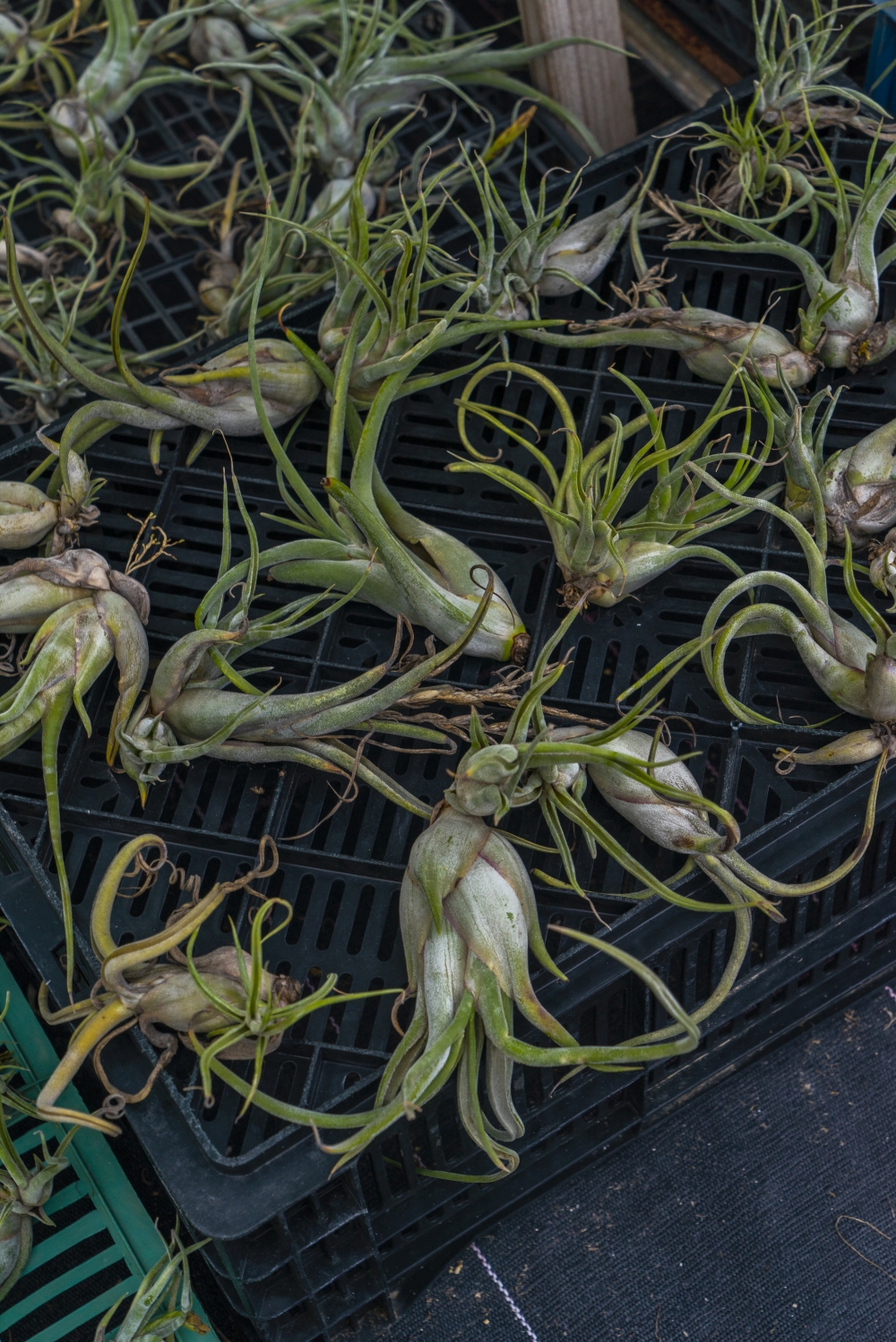 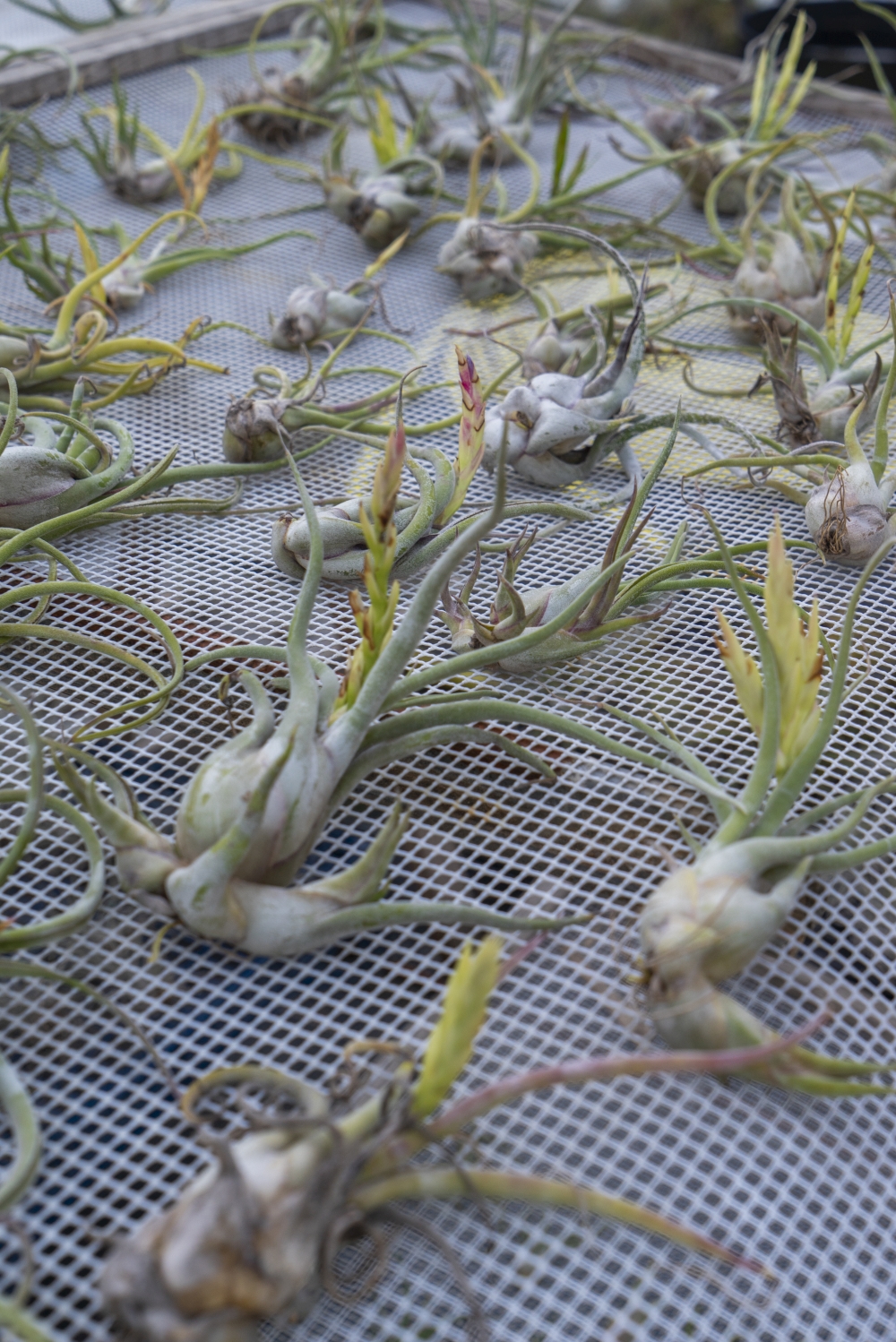 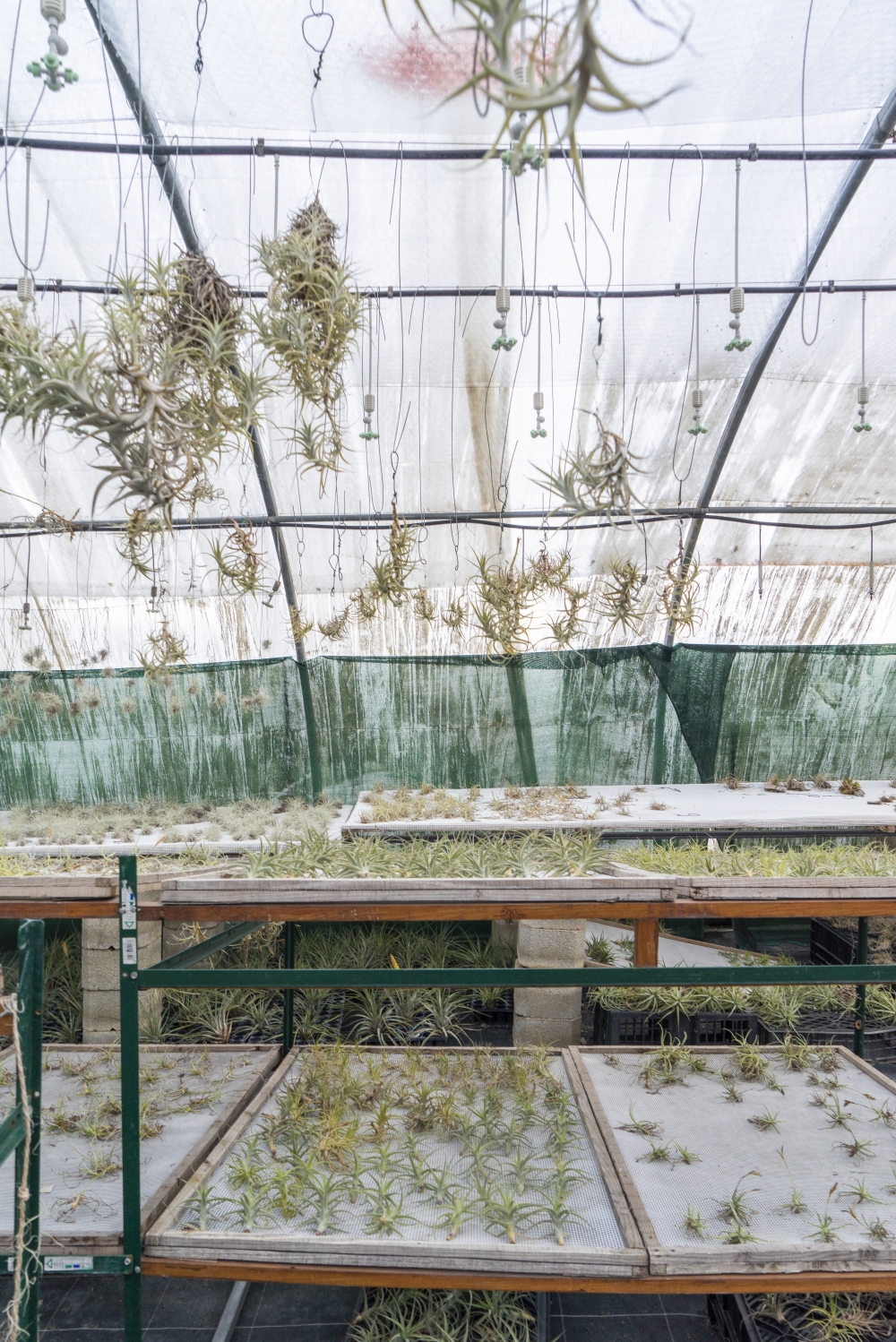 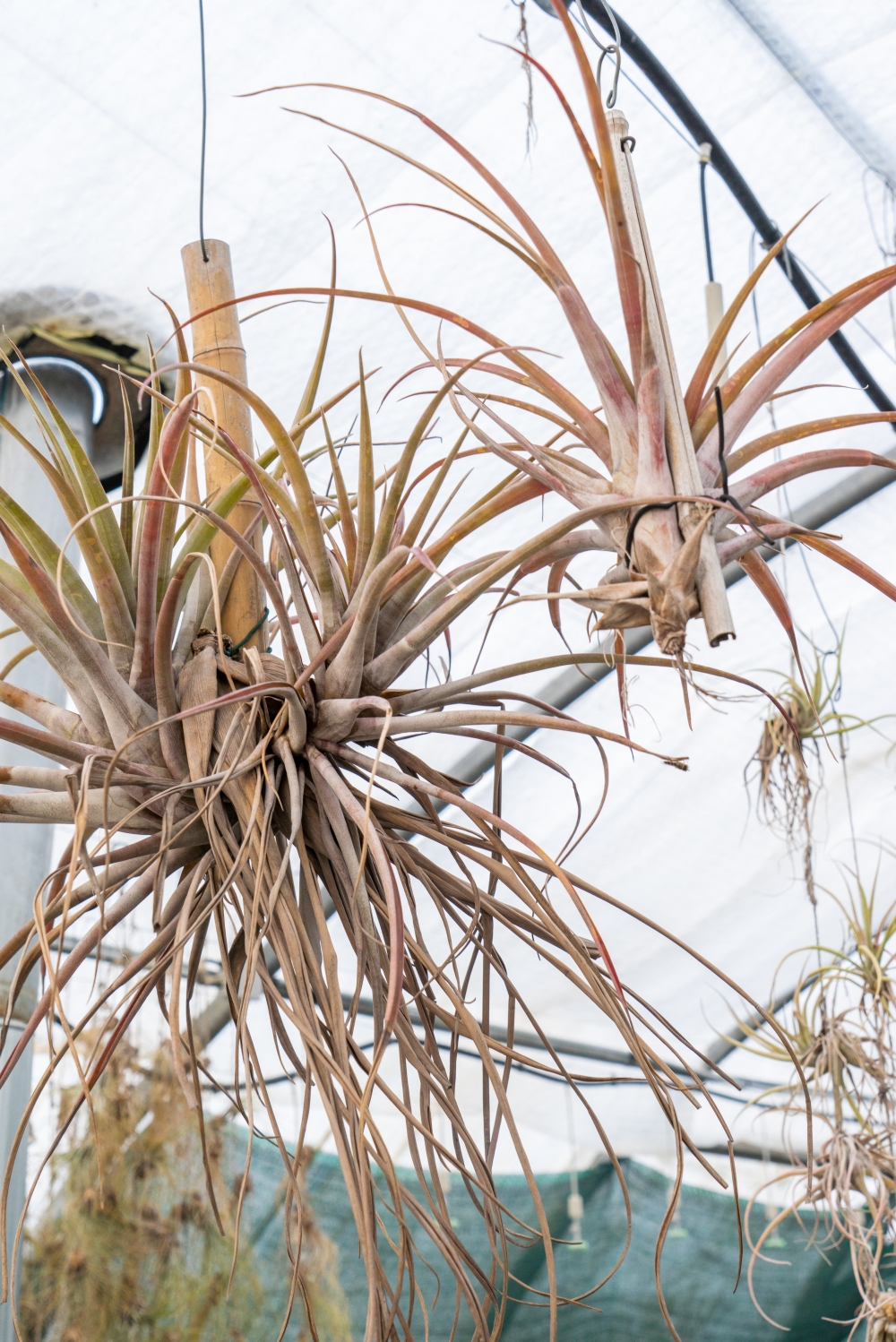 It was a short but lovely visit to Laurie’s greenhouses! Decorating with Tillandsia is fun and requires different techniques than common houseplants. I have owned a few Tillandsia before but I was not dedicated enough to keep them happy and healthy: I forgot to water them regularly (even though they “warn you” by changing their appearance) and kept them in a space that was too cold. The current home has different light and heating so I’m already thinking of how I can add some Spanish moss to our home 😉 What about you? 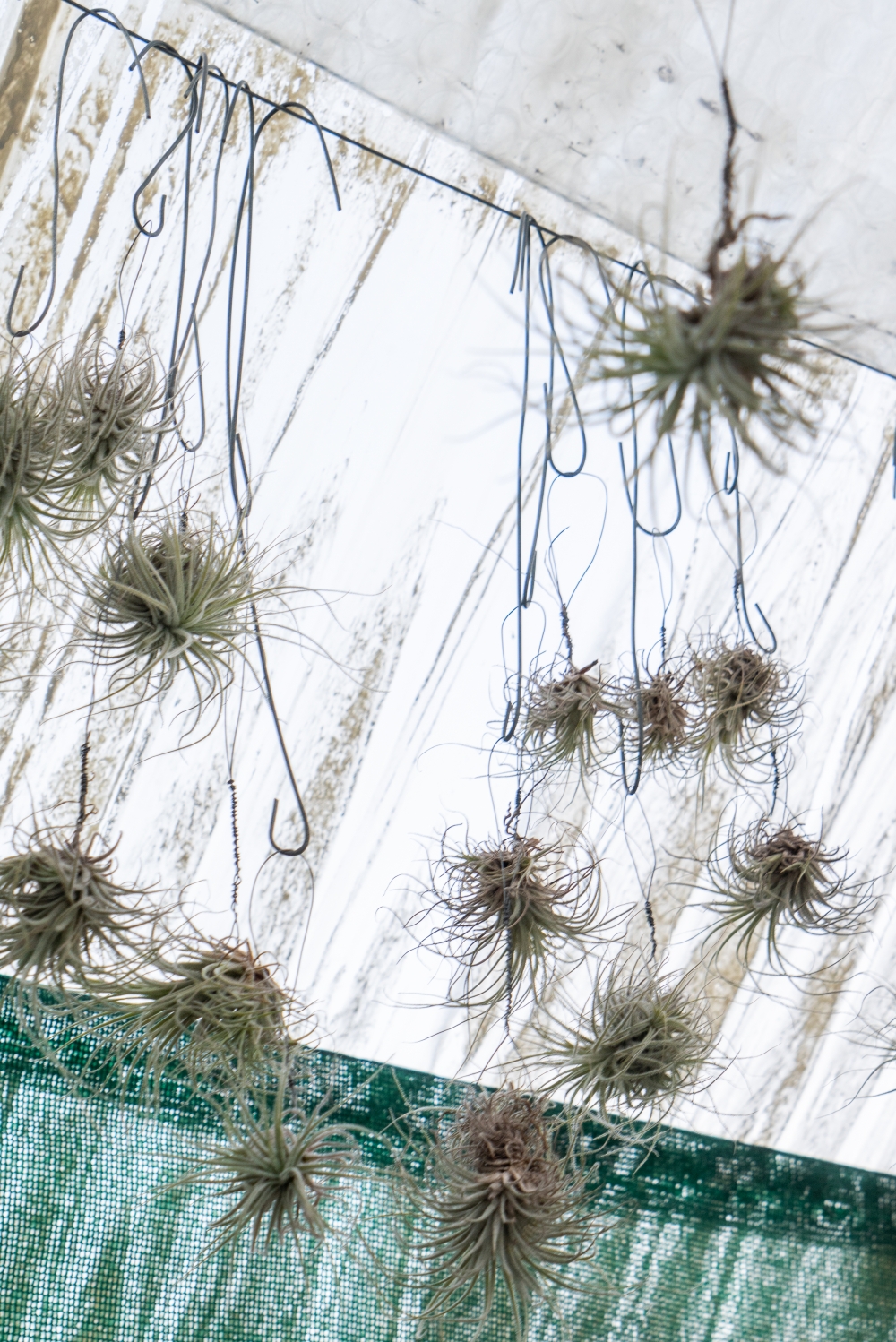 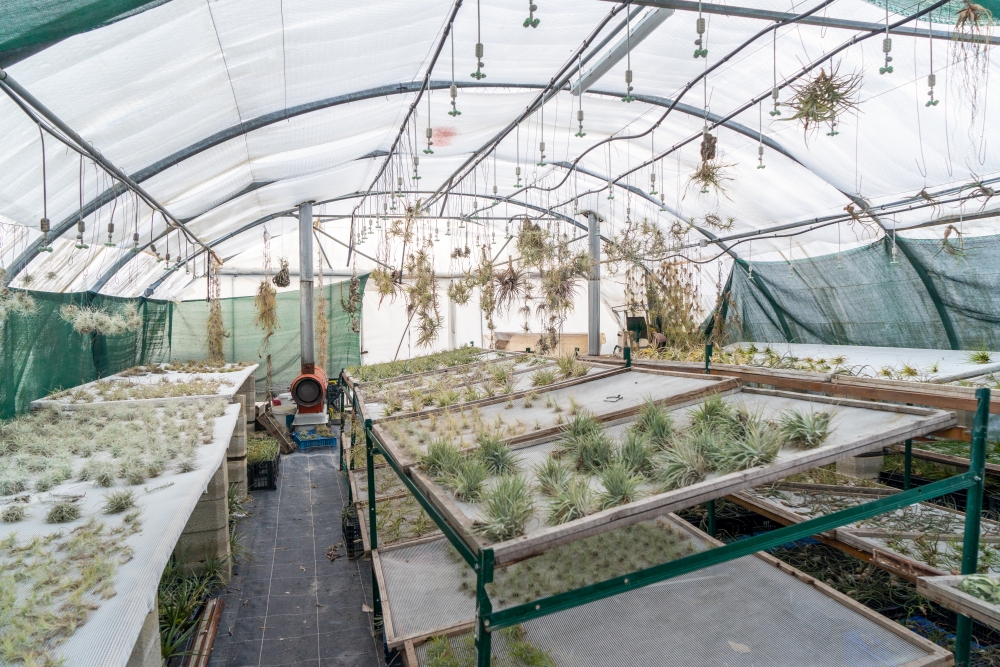