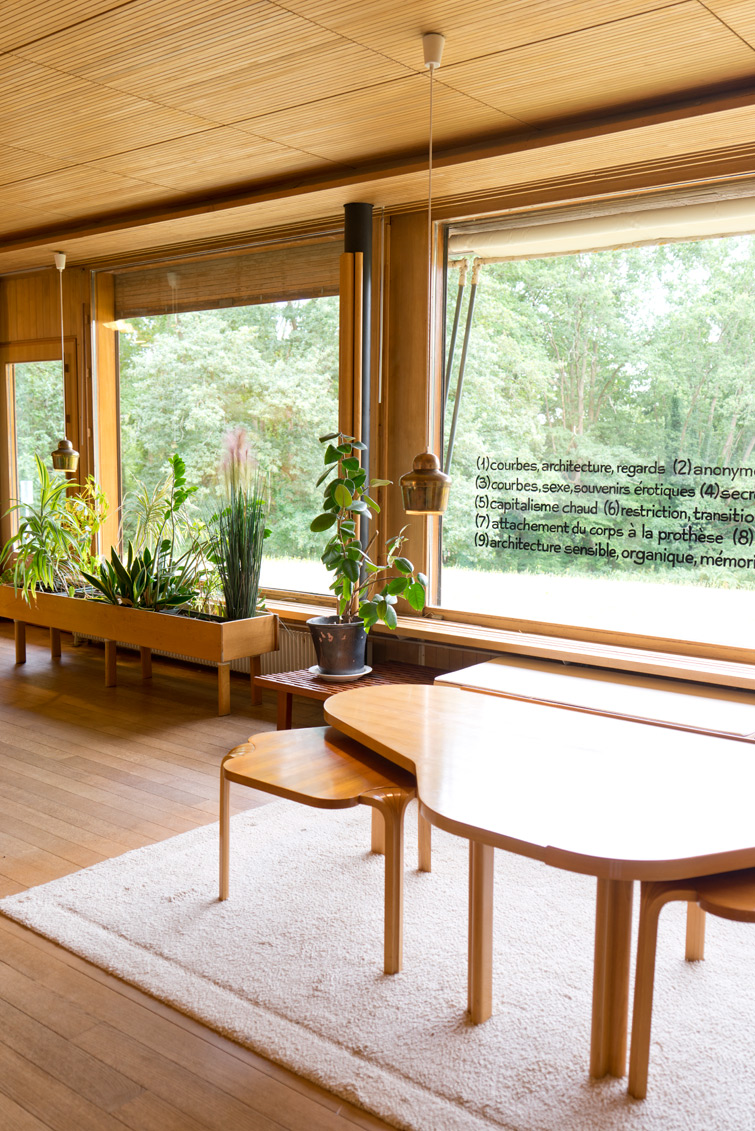 On your birthday you get to choose what you want to eat or do, right? Well, I know I do! The night before my sister and I baked a delicious Challah loaf and made Labneh. But before enjoying that feast on the "big" day, we were headed to a place that has been on my list for a while now: the Maison Louis Carré in Bazoches-sur-Guyonne, 40km south west of Paris. In Helsinki we got to visit Alvar Aalto's studio and as you know, I loved it, so a visit to the only remaining building by Alvar Aalto building here in France, was a must. 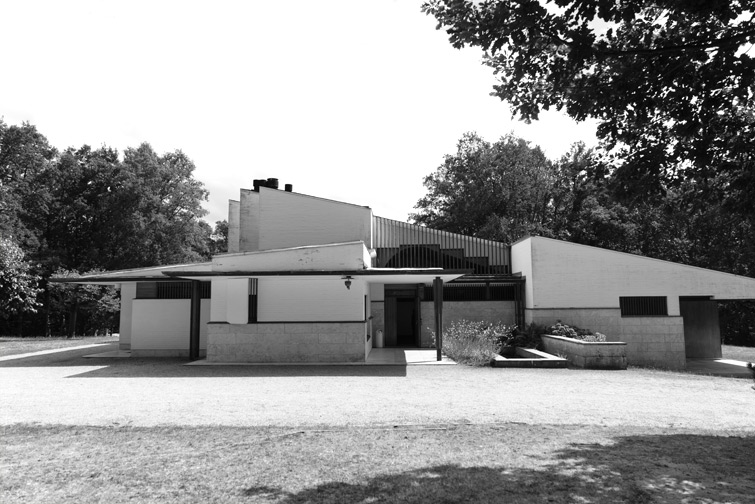 At the end of a road in a residential area, we found this amazing building designed by Finnish designer Alvar Aalto for French art dealer and collector, and friend, Louis Carré. The maison is situated on the top of a mini-hill that Louis Carré purchased in 1955. He met Alvar Aalto at the Venice Biennale where the architect was working on the 1956 Finnish Pavillion, and they became friends. Monsieur Carré asked Alvar Aalto to build him a private home for him and his wife Olga, where he could also display his art and host small exhibitions and events. Apparently he had a "nearly" unlimited budget to build something wonderful, which he did, yet in a typical Alvar Aalto style of understated, pure design. You can feel (and see!) that no detail was ignored. The Maison Carré was completed in 1959 and the swimmingpool with ajacient poolhouse on the same property was finished a few years later, in 1963. 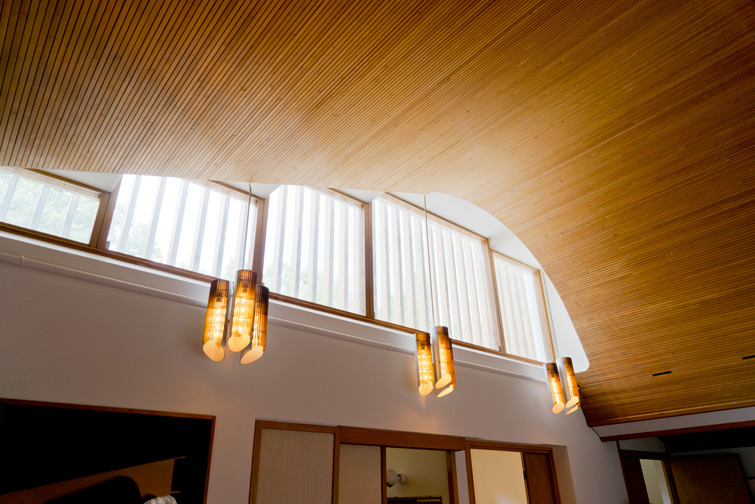 One of the things that I like most in Alvar Aalto's work, is his eye for form and function, not only in the construction of his buildings, but also in the furniture that he designed for all of his projects, that are usually "part of the deal". His pendant lights are not only beautiful to look at, they also have a fonction, in case of this Bilberry pendant light, it was designed to work as a spotlight for art: 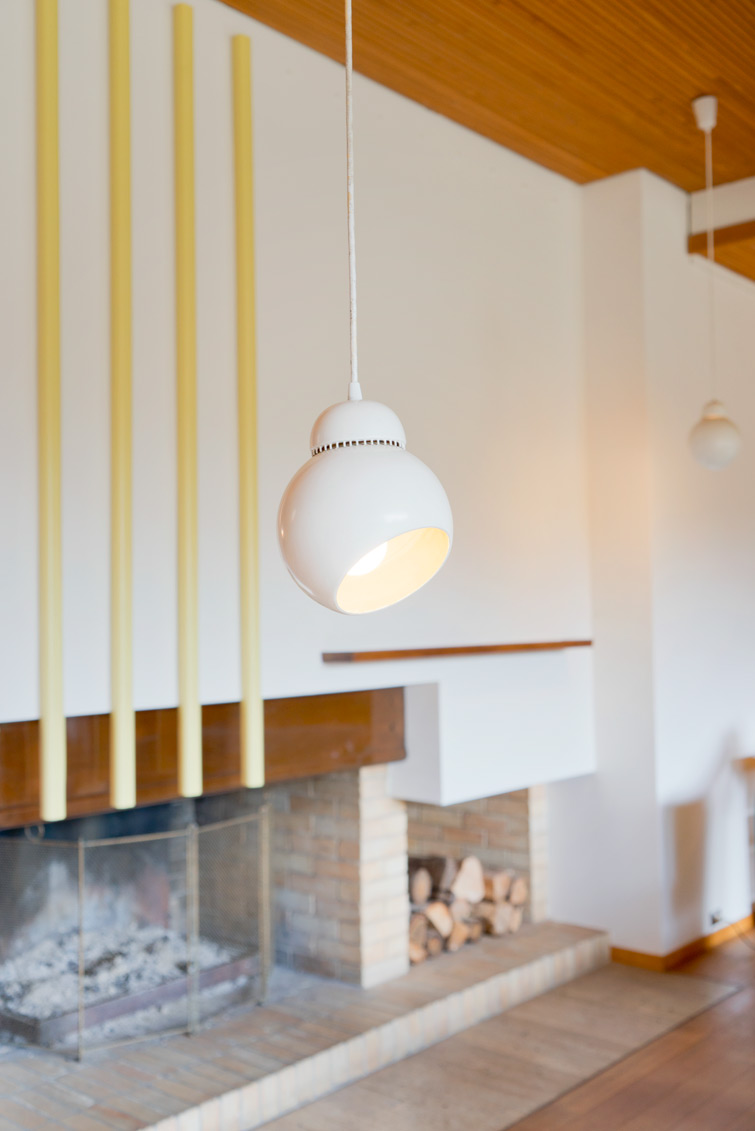 Until September 3rd 2017, there is an exhibition at the Maison Louis Carré, called La politesse de Wassermann by Laëtitia Badaut Haussmann, which I found to be in a complete contrast with the building itself: it emphasises the extraordinary/insane things that could have happened at the Maison, through references like Hugh Hefner (the texts on the windows and the silver silk sheets on the beds) and others. While I don't grab the entire idea and story of this exhibition (more about it here if you like), I found it quite daring to install such a bold exhibition in such an understated home. And at some points it creates an interesting dynamic: 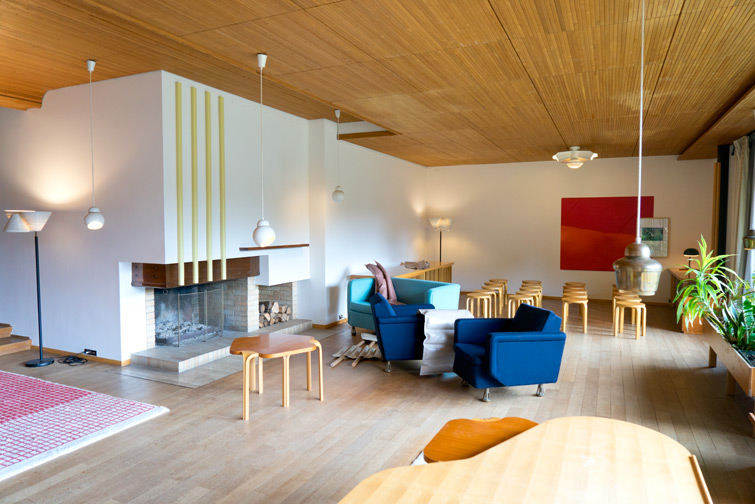 One of the bedrooms with a view over the garden: 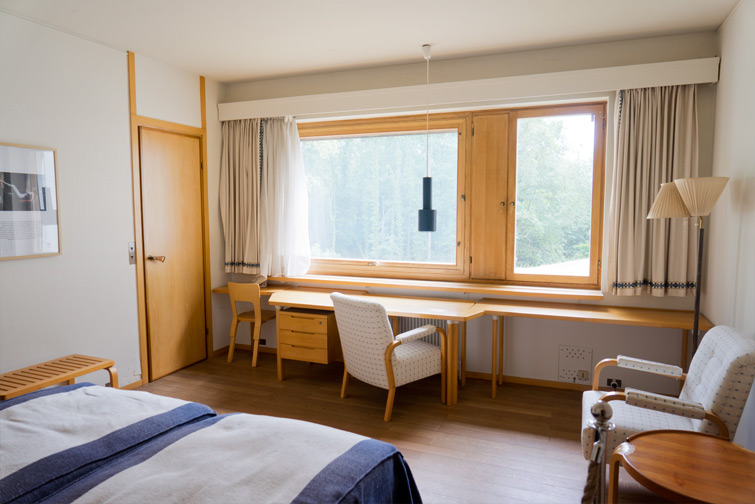 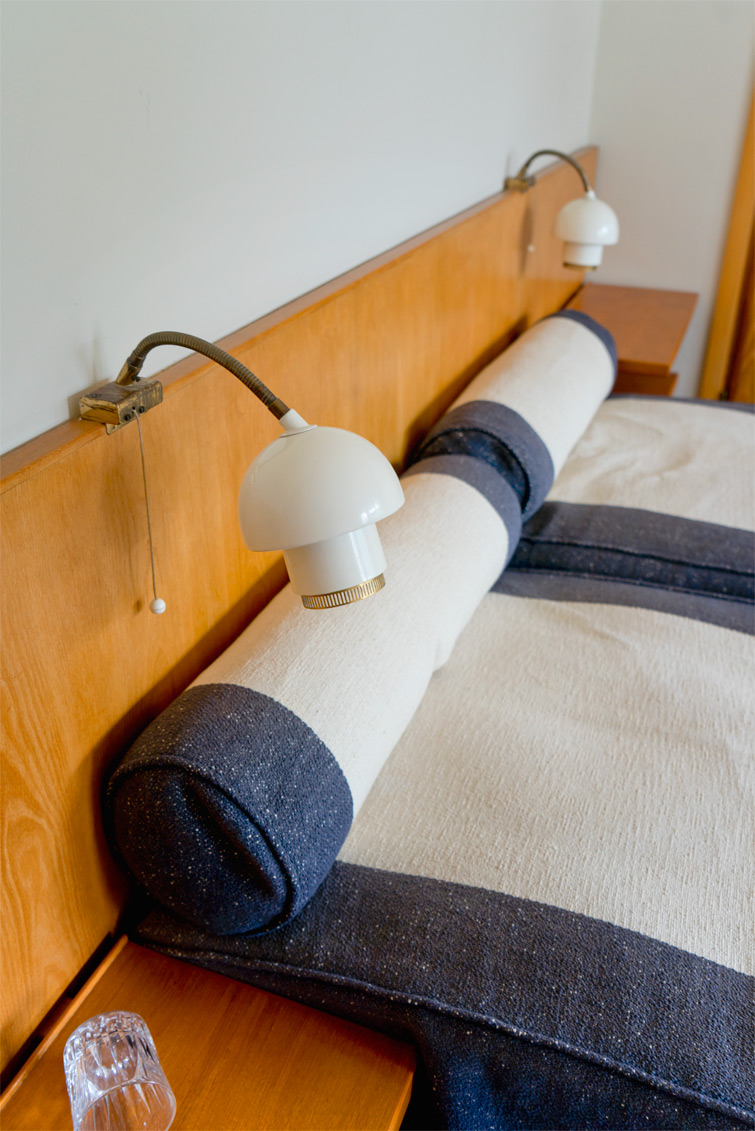 One of my favorite pieces in the house: the Bell pendant lights above the dining table with extra spots to highlight the artwork on the walls! 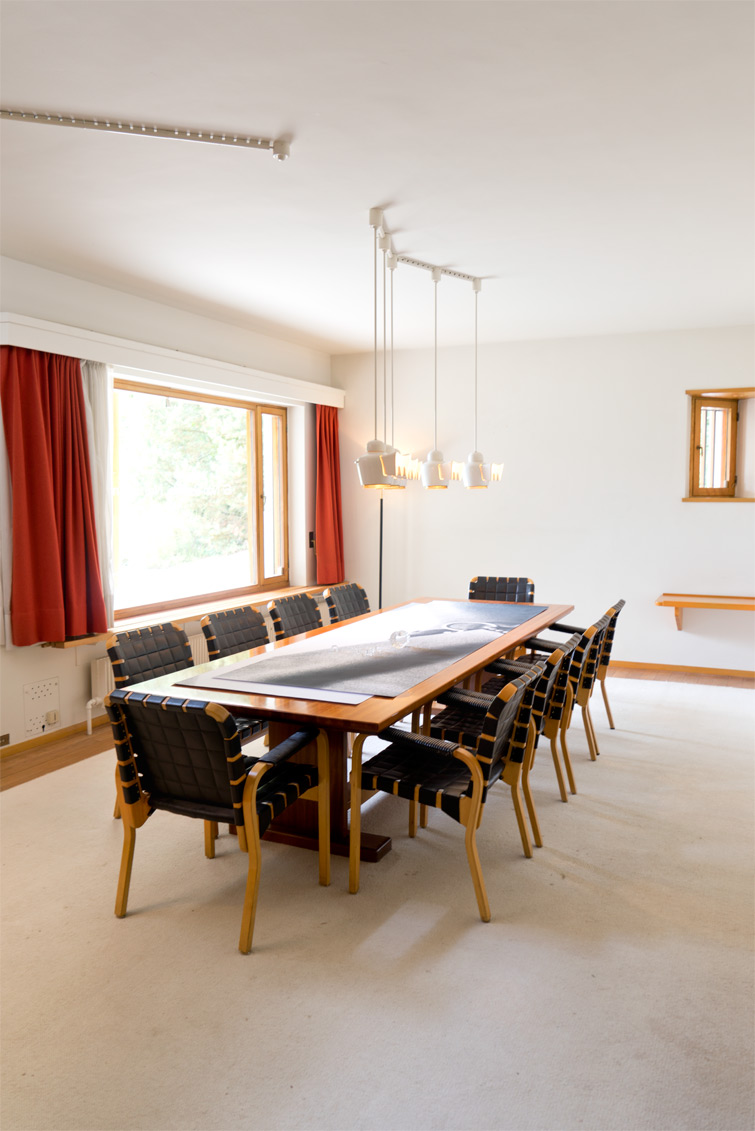 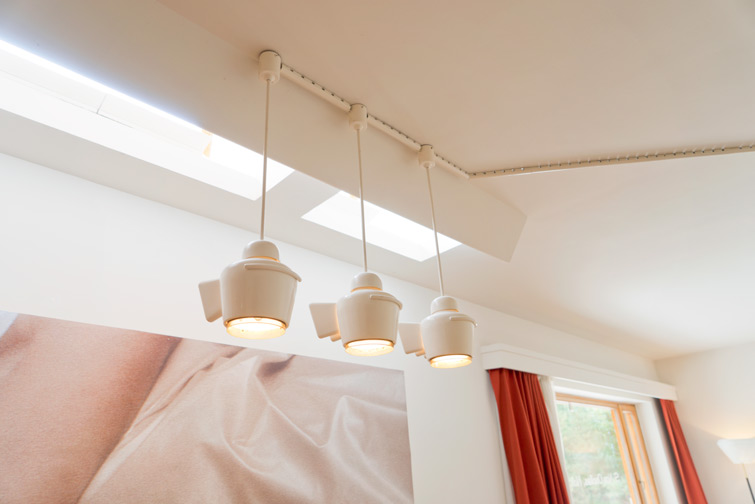 One of the bedrooms, with a temporary installation by Laëtitia Badaut Haussmann: 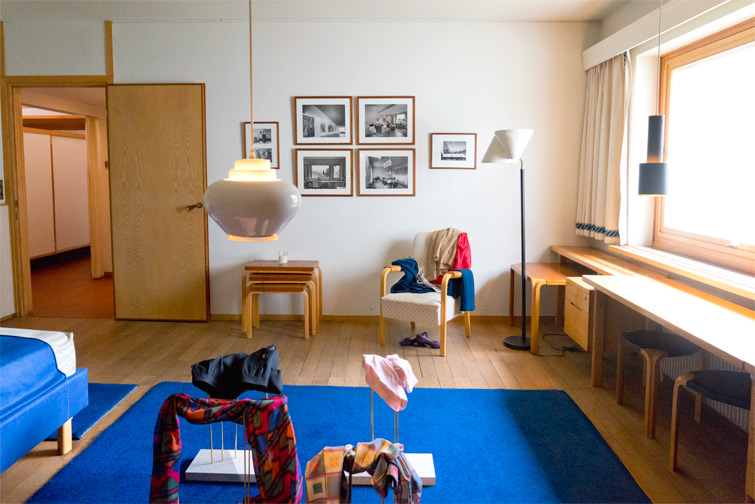 Louis Carré died in 1977, and his wife Olga, lived in the house until 2002. Many of the original artwork was then sold, but the old photos in the bedroom show what the interior really looked like, several decades ago, and the view over the countryside: 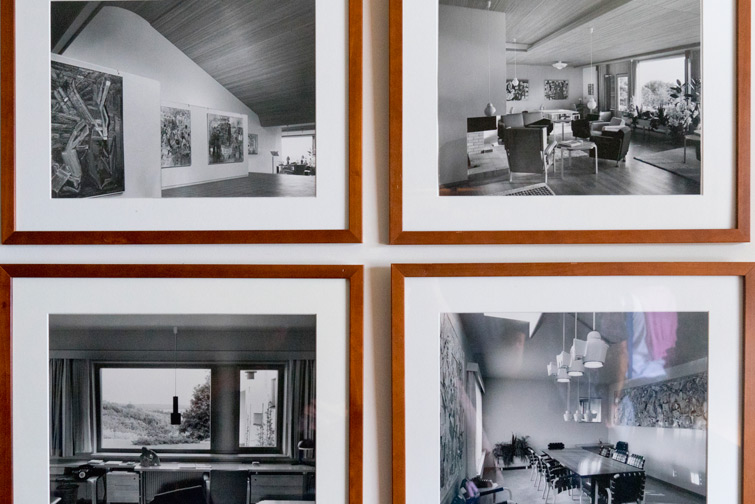 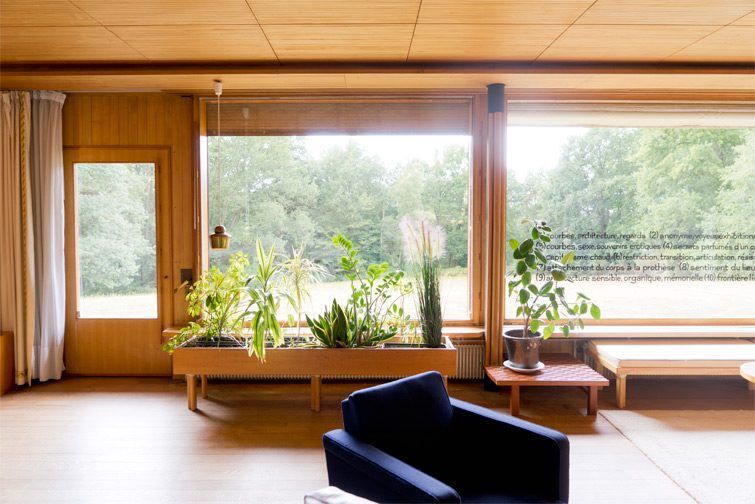 Another part of the exhibition that I completely didn't understand, but that I quite liked: it's a Sunday Night Pool Party waiting to happen, right?! 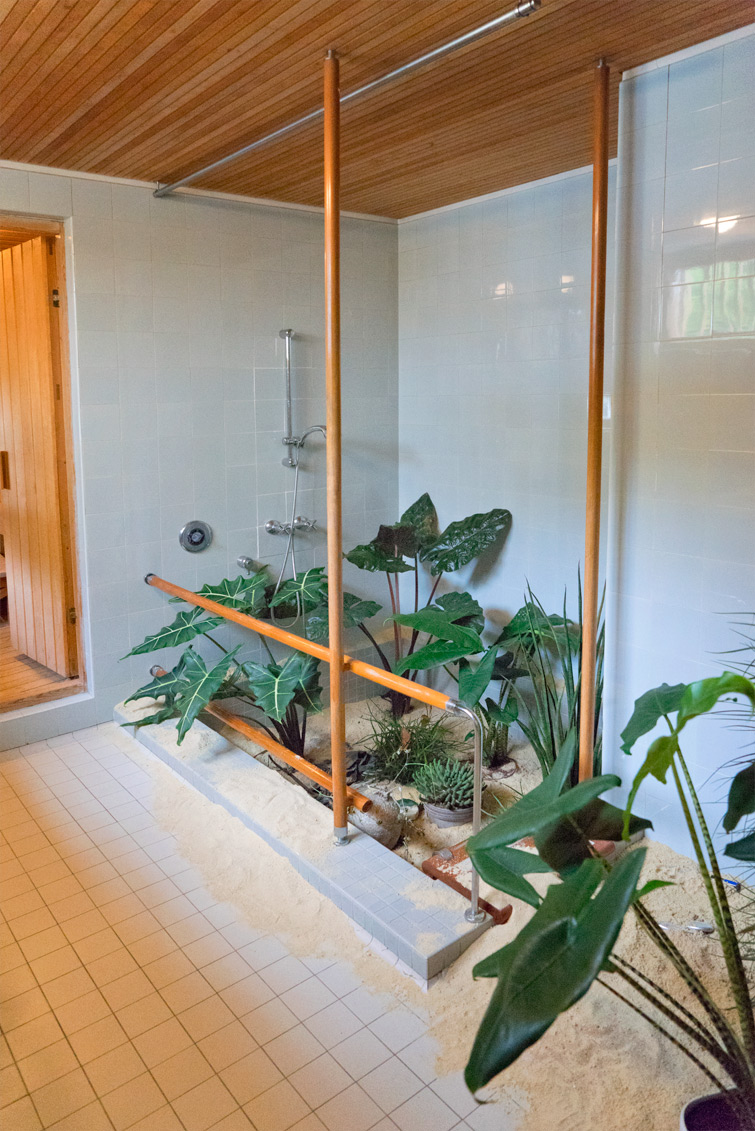 Unfortunately the first floor is not open to the public, it used to be the housing of the staff and has not been renovated (yet): 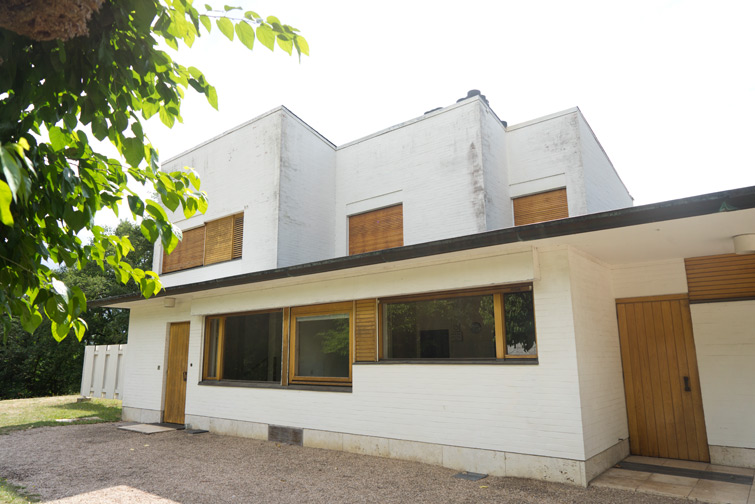 Si Non Oscillas Noli Tintinnare on the left window: if you don't swing, don't ring. A reference to the Play Mansion: 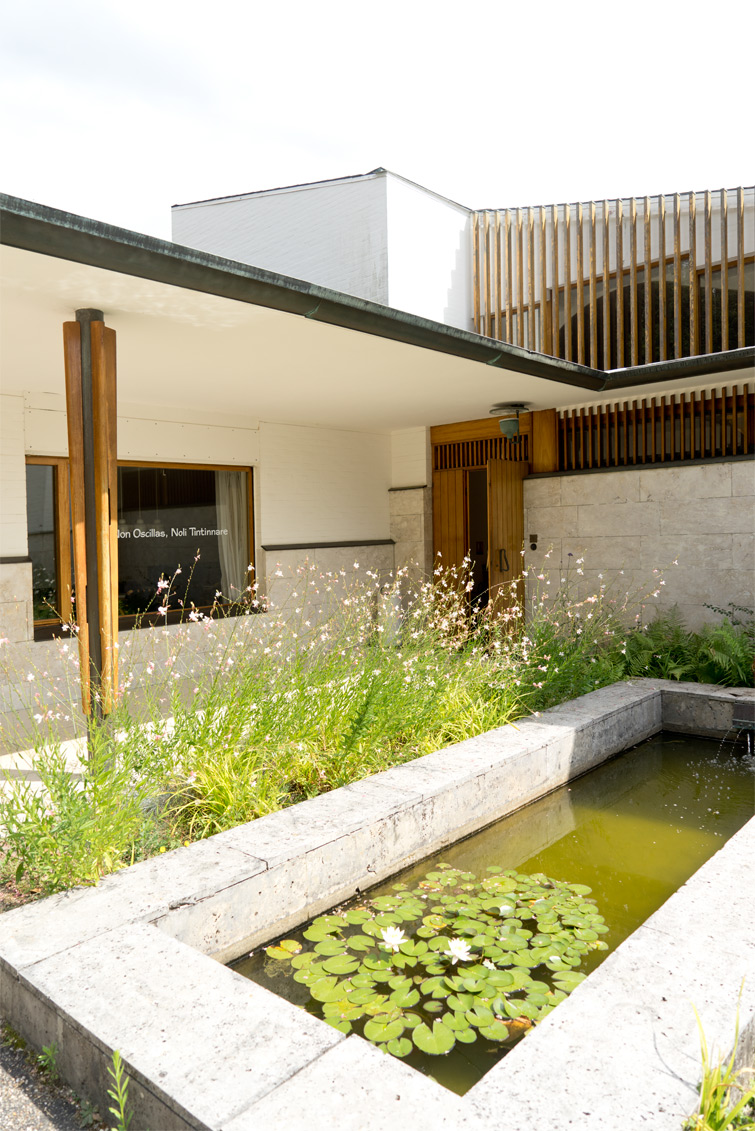 Why redesign a chimney, if you can use your own lamp-designs, turn them upside down, and use this instead! The chimney on the roof is actually inspired by Aalto's A110 pendant lights: 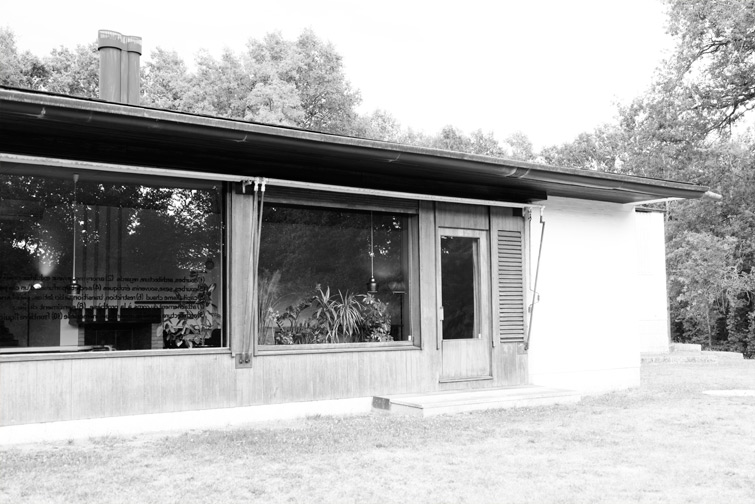 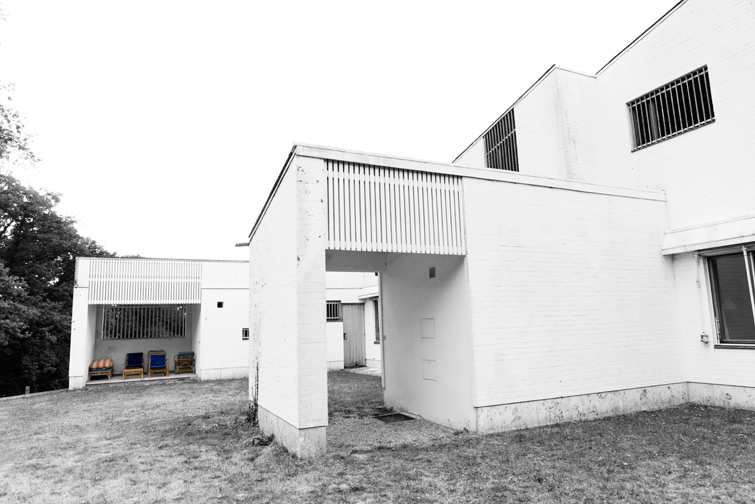 The garden was designed as the ideal backdrop for many garden parties: 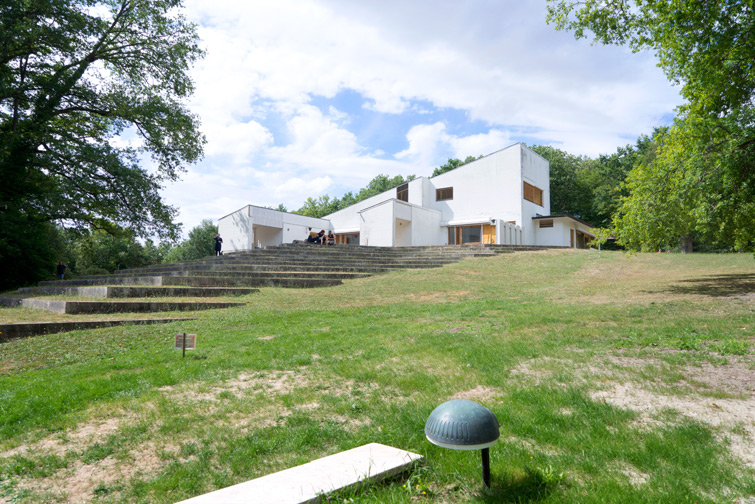 And the most recently renovated part of the property: the swimming pool and  poolhouse, with some very beautiful garden lights, designed by Alvar Aalto himself, bien sûr: 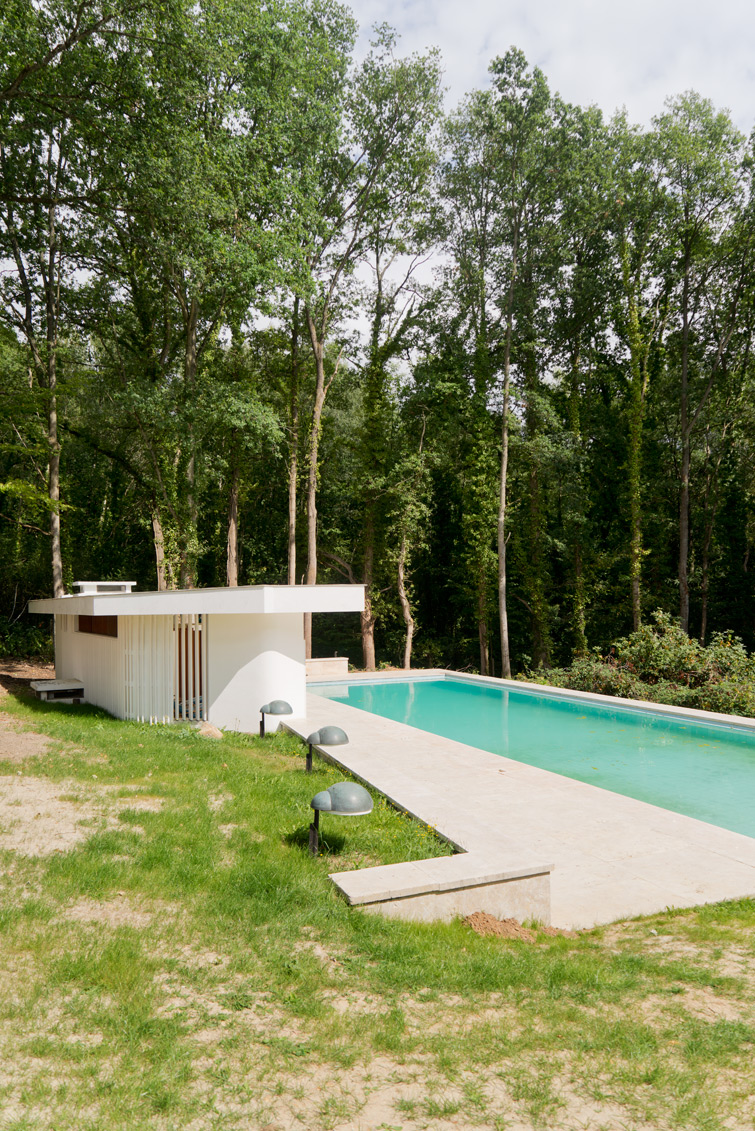 And there, in that fitting room, if you look closely: does your eye see what I see? 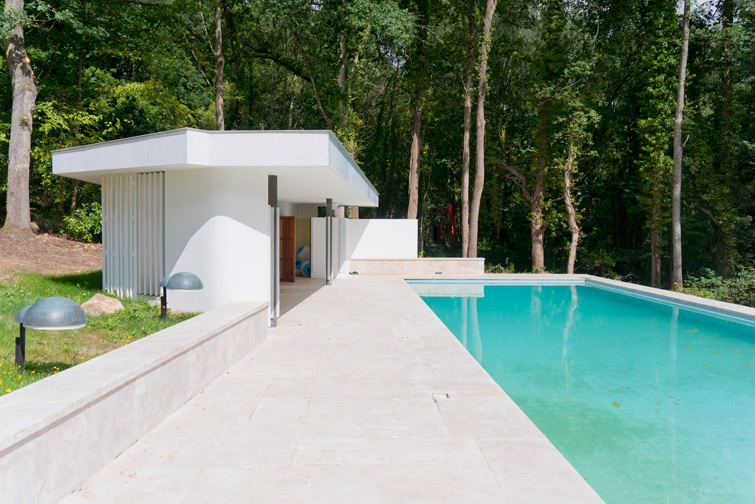 Exactly, a bunch of eyeballs. Also part of the exhibition. Usually they float on the water in the pool, but the staff didn't have time to put them in the pool again, after a big photoshoot at the Maison Carré the day before. 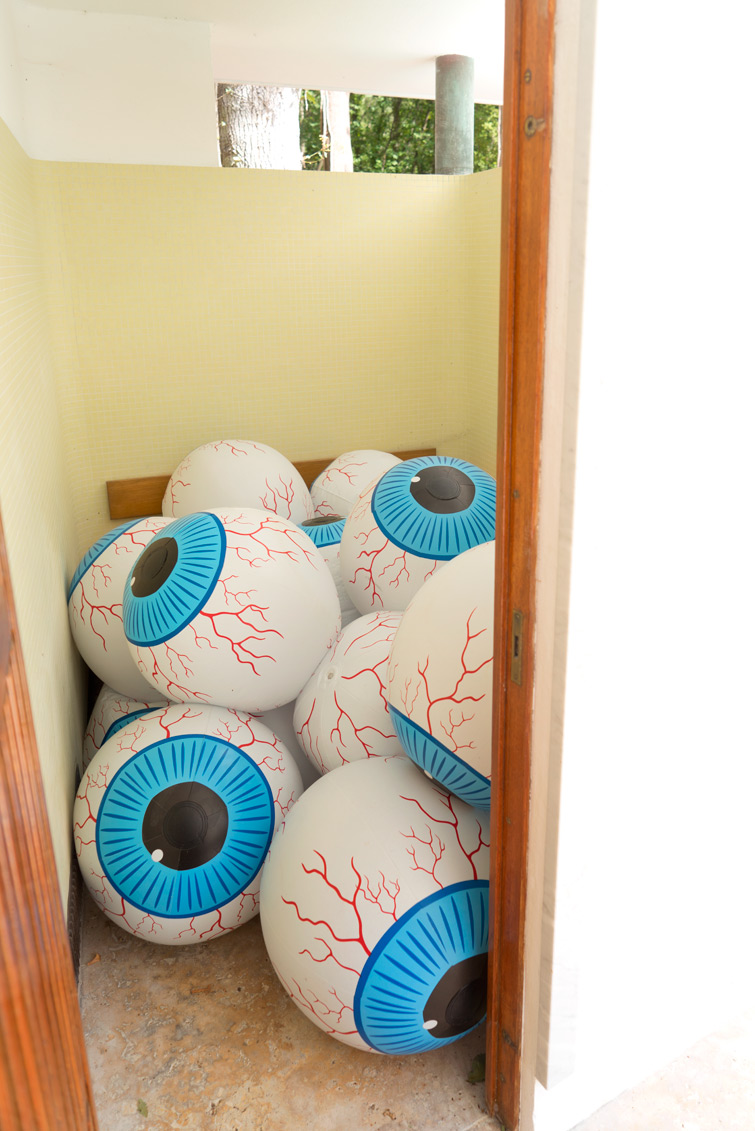 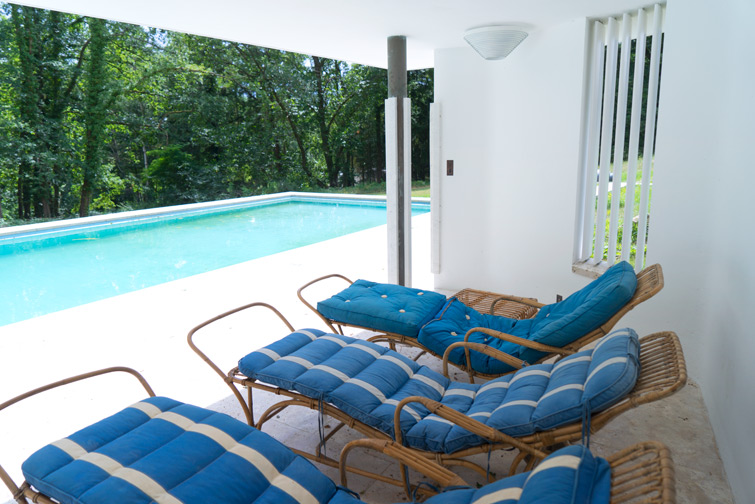 Overall I warmy recommend to visit the Maison Louis Carré if you ever have the chance. Make sure to make a reservation for a guided tour (it's the only option!) and enjoy the only remaining building of Alvar Aalto in France. And while you're in Bazoches, head to the other side of the road for a visit of the Jean Monnet house and enter a completely different world. And if you're lucky like me, you get treated to some fresh challah loaf with labneh and pancakes when you get home 😉 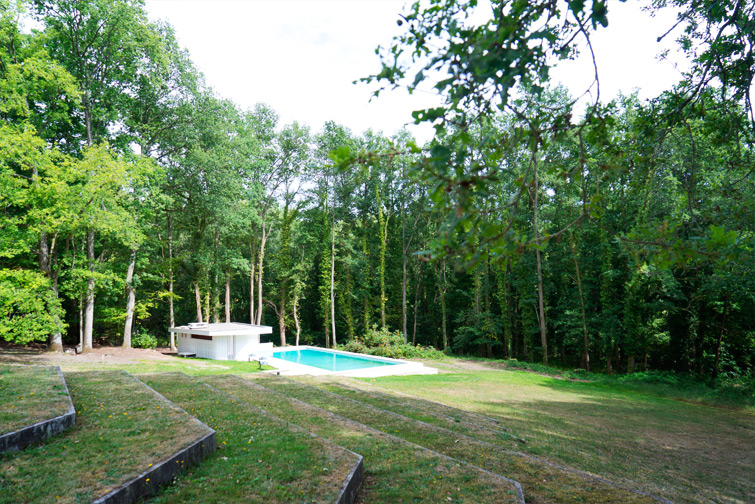