Skip to content
One of my side projects for the past 6 years, is the creation of Christmas cards for an elementary school in the Netherlands, together with my father. I don't fully recall how it started in 2005, but we decided to photograph all the children of the entire school and group them per school class. A simple idea which took a lot of time, as you can imagine, with 460 individual photos. We both enjoyed working on it, the kids and their parents & teachers loved the x-mas-card and in 2006 we tried something new.

We gathered the childrend in the shape of a star. Of course again it took quite some time, especially because we absolutely wanted to include all the children on the cards. In november a lot of kids are ill due to the Sinterklaas stress… so we had to leave blank spaces in the composition and add photos of those kids when they were fit again.

In 2007 we were wiser and took 1 photo per class and masked it with x-mas words and icons. The few children that were ill, were added later into the group photos. 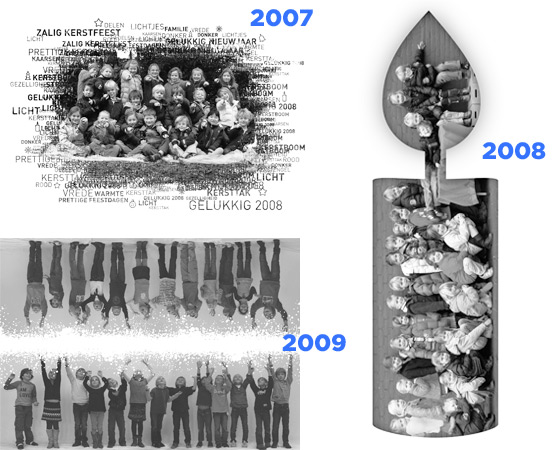 2008: a new year: a new idea. We tried to create a lighted candle. The larger part of the group formed the candle, one of them was the candle wick and a few kids formed the flame. Again, one of the challenges was to limit the time needed to take the picture.

At first we thought it would be cool if the "candle wick kid" would be carried by the children of the candle and the flame. But the experience learned that it was safer & faster to lay him/her down on a table.

In 2009 it snowed on the x-mas card. The children were photographed in small groups of 6 or 7, catching invisible snowflakes. The snowflakes were added later on. The card was folded right through the snowy part.

After snow, stars, candles and words, the idea for 2010 was the Christmas ball. The children were positioned in circle, outside on the playground in front of the school. We attached a nice ribbon and hung it in the x-mas tree! 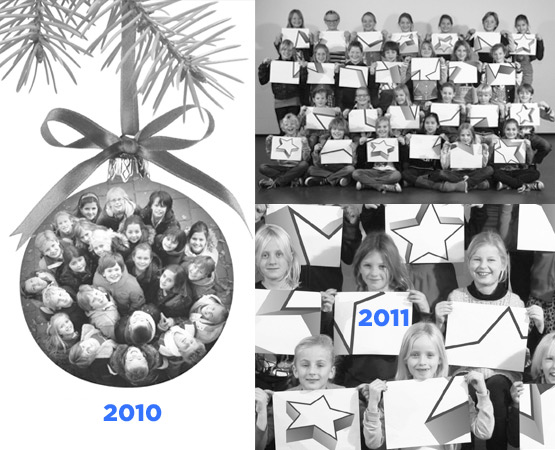 This year we were inspired by the performance art called Mass Games, in which large numbers of people take part in a performance that emphasizes group dynamics rather than individual prowess. Our starting point was the typical school picture with 4 rows of children. All the children were holding a blank piece of paper on which we added 3D stars in post production.